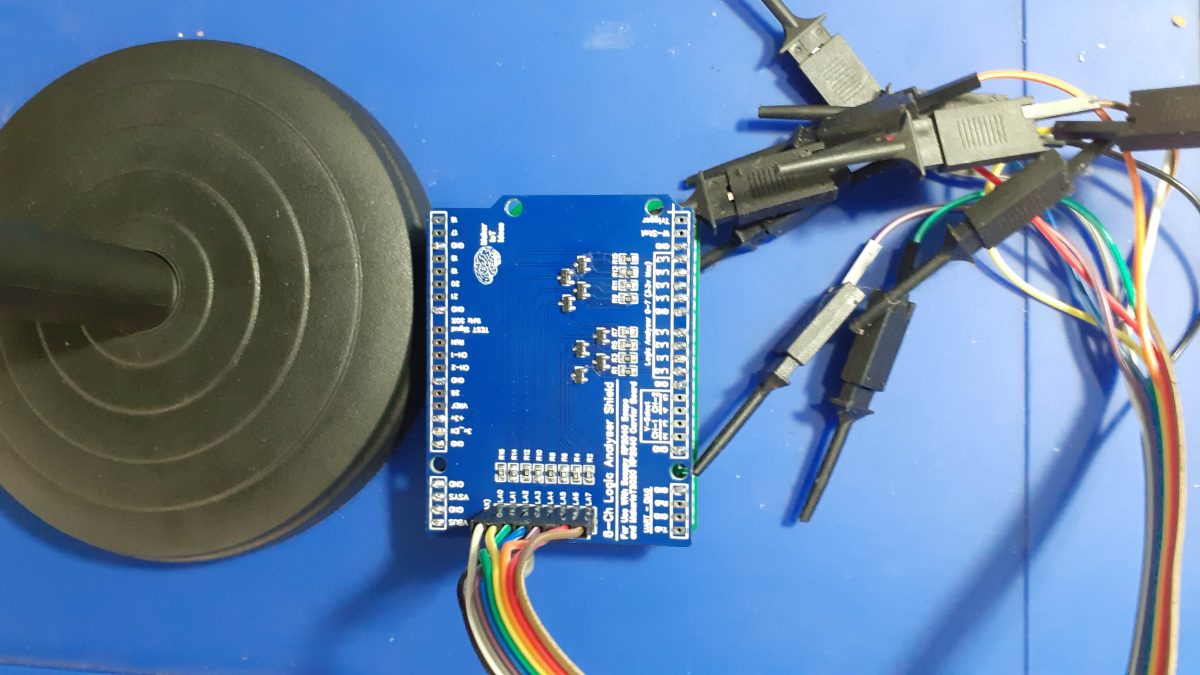 As part two out of a series of three articles (part 1), This is the Scoppy RP2040 Logic analyzer shield, for use with our Raspberry Pi Pico Carrier board and the Scoppy Oscilloscope firmware for the RP2040.

In Part one, we took a very quick look at the installation of the firmware, as well as the basic limitations for use of this very useful project.

In this part, I want to take a quick look at my Logic Analyser shield, for use with this project, as well as the Raspberry Pi Pico Carrier Board. In part one, we saw that the logic analyzer inputs are limited to 3.3v by the RP2040 GPIO pins. This shield is a prototype attempt to overcome those limitations by using logic-level conversion.

What is on the PCB ?

The PCB is designed to be an add-on shield for the Makeriot2020 Raspberry Pi Pico Carrier Board. (Get your own here) It is in the same form factor as the Arduino Uno shields, but with pinputs specific to the RP2040 and Raspberry Pi Pico.

All Raspberry Pi Pico pins are broken out and labelled, as well as all of the pins specific to the Scoppy App have been clearly labelled. The board are stackable onto the Pico Carrier board, via standard 2.54mm Male Headers, or extra long, stackable female 2.45mm headers, similar to those found on common Arduino shields.

The use of stackable headers will allow simultaneous use of the logic analyser shield and the Analog frontend shield, introduced in part 3 of this series.

In addition to that, a 2×8-way 2.54mm Male header provides access to the 8 logic converted logic analyser inputs.

Logic conversion is done with a simple circuit, comprising a Bss138 N-Channel Mosfet and two 10K resistors per channel.

The shield is powered directly from the Pico Carrier board, which is in turn powered from the OTG cable to the Android Phone or tablet used to display the captured data. ( see Part 1 for installation instructions and other details regarding the Scoppy Project)

The logic level converters allow the use of a 5v logic signal, which is an improvement over the original design, which allowed only 3.3v inputs.

The Schematic and PCB Layout

The PCB for this project has been manufactured at PCBWay.
Please consider supporting them if you would like your own copy of this PCB, or if you have any PCB of your own that you need to have manufactured.

Some more pictures of the device

All credits for the development of the Scoppy firmware goes to fhdm-dev. This shield is a modification made by MakerIOT2020, and thus belongs to me. In the spirit of the original project, It will however be released to the public as a free open-source project ( free as in free download, free schematic, free design ). The PCB manufacturing files will be made available for free at a later stage, or can be ordered from PCBWay from this link